Clear Skies in the Delta: The Sequel (Paperback) 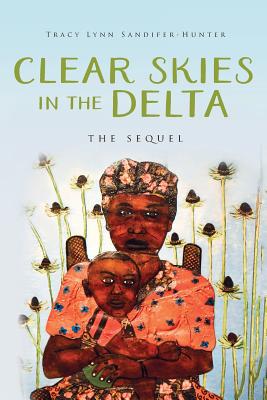 Clear Skies in the Delta: The Sequel (Paperback)

Clear Skies in the Delta chronicles the Sandifers as they depart from the sunshine and innocence of the Money Road. Neeyla the main character is coming of age with a baby girl in tow. She learns not only survival and independence as she and her siblings adjust to their new way of life in Greenwood, but she also learns hard lessons about life and love as well. Neeyla, with the aid of the family's matriarch, her mother Carrie, adapts to life in the Mississippi Delta as they take up residence around various places in town. The family initially settles on the edge of town in East Greenwood where the fragrant honeysuckles grow plentiful in deep ditches surrounded by mounds of plush green clover grass. The homes resemble "tiny matchboxes with the windows cut out" but inhabit myriads of hospitable souls. Here we find Neeyla's journey of self-discovery begins where she explores the depth and fiber of her surrounding through the eyes of both her family and her child.

Later, as Neeyla begins her true walk towards independence, she truly learns the lessons of a lifetime about marriage and the "for better" or "for worse" it often entails while she raises her only child. After a fatal stab at romance, Neeyla quietly matures into a new kind of independence while working as a Nurse's assistant when she moves with her daughter to the worst part of town GP (Gangsta's Paradise). However, this otherwise impoverished environment provides the perfect stimuli to create a purposeful canvas for her now teenage daughter to emerge from the depths of degradation and despair. Tracy excels as an honor student, visual artist, and later earns a full scholarship to college. It is at this point that Neeyla herself begins to fulfill the matriarchal role as Tracy Lynn's voice becomes more prominent in the novel as she is now coming of age herself.

Neeyla and her Cousin, Reena Sandifer soon become reaqauinted, and we find that Reena has chosen a life of success as a college professor and the wife of a Nigerin ophthalmologist. However, she is still the same fast tail Reena and is as buck wild as ever. After Tracy's graduation, Reena returns home from Illinois during the Christmas holidays, and the family is met with a stunning surprise. Reena and her husband Adebiyi are returning to Lagos, Africa for the summer, and Reena has decided to take Tracy Lynn back with them to help teach the Yorubi children English. Neeyal becomes both incensed and enraged. "You ain't taking my child to no Africa with all them wild...animals roaming around. Find you something else to do like spend that mane's money." After a time of self-reflection and a cry of independence from Tracy, Neeyla relinquishes her overprotectiveness of her daughterand concedes to Reena'a wishes.

Later in July, after Tracy's first year of college, the scenery shifts to the picturesque city of Lagos, Adebiyi's hometown. Here we are presented with a host of characters as sunny as the town itself. Fatima, Adebiyi's older sister, embraces Tracy from the moment she lays eyes on her and takes it on herself to teach her both custom and cuisine. Lotus, the housekeeper, is loaded with biting wit as so causes chaos for no apparent reason. Finally, Amir who is Reena's personal driver, among other things, has his own share of skeletons in the closet with Reena's as we ultimately learn that all is not fair in love and war. Near the end of the story, we witness the naming of Amir's wife Adeaze's twin sons during the Naming Ceremony where Reena finds herself caught in the middle of a vicious love triangle and call home to Neelyla for advice.