Walter Anderson: The Extraordinary Life and Art of the Islander (Hardcover) 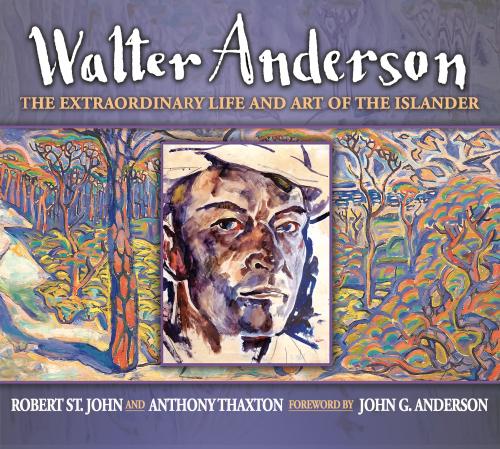 Walter Anderson: The Extraordinary Life and Art of the Islander (Hardcover)


Special Order - Subject to Availability
“There have been many books about my father, but none like this one.” - JOHN G. ANDERSON
ROBERT ST. JOHN and ANTHONY THAXTON have produced a gorgeous companion piece to their moving documentary film airing on Mississippi Public Broadcasting. Lavishly illustrated, this comprehensive book presents the amazing world of Walter Inglis Anderson in a thoughtful progression of his art and through poignant stories and observations by his wife, Sissy, and their four children: Mary, Billy, Leif, and John (who also wrote the foreword). Walter Anderson: The Extraordinary Life and Art of The Islander contains numerous rare photographs, artwork never before seen, and paintings lost through Hurricane Katrina. It’s the extraordinary story of a man called “America’s Van Gogh.”
Though featured in countless books and exhibitions (including a 2003 retrospective show at the Smithsonian Institution on the centennial of his birth), Walter Anderson has not yet achieved his deserved place in American art history. This book shines light on all the facets of Anderson’s unbelievable output and presents a thoughtful progression of his life and art. With complete access to the Anderson family archives and the vaults of the Walter Anderson Museum of Art, this comprehensive volume brings together much of the artist’s finest work as well as paintings and photographs that have never been published. Walter Anderson: The Extraordinary Life and Art of The Islander is an eye-opening and inspiring work to be treasured and dipped into again and again. Also included with this book are free download links for the documentary film and soundtrack
“This book is essential for anyone interested in my father.”
- JOHN G. ANDERSON

ROBERT ST. JOHN is the author of eleven books and owns the Crescent City Grill, Mahogany Bar, Branch, Tabella, Ed’s Burger Joint, The Midtowner, and El Rayo Tex Mex in Hattiesburg, Mississippi. For twenty years, St. John has written a weekly syndicated newspaper column and has been named Mississippi’s top chef numerous years. St. John is also the creator, producer, and co-host of the PBS series Palate to Palette. He founded Extra Table, a nonprofit organization providing healthy food to Mississippi soup kitchens and pantries. He is a founding member of the Independent Restaurant Coalition and was an integral part of a small group that recently secured $28.6 billion in grants to aid independent restaurants affected by the COVID crisis. St. John is on the board of the Mississippi Book Festival. He and his wife, Jill, have two children, Holleman and Harrison. ANTHONY THAXTON has won awards as a painter, educator, television director, and filmmaker. He was named the 2019 Distinguished Art Alumnus of the Year for Mississippi College. Thaxton’s art has been featured in magazines and books, including Love Letters: An Illustrated Courtship and Drawn to Christ, and his photographs and videos have been shown on Good Morning America, FOX & Friends, and CNN.com, He writes, directs, films, and edits the Palate to Palette television series through his production company, Thaxton Studios. He produced a line of instructional videos for Hall of Fame illustrator Thomas Blackshear and has authored an upcoming book on the artist. He is the co-author of The Flip Side, a look at overcoming failure. He enjoys playing music with his son, painting with his daughter, and traveling with his beautiful wife.