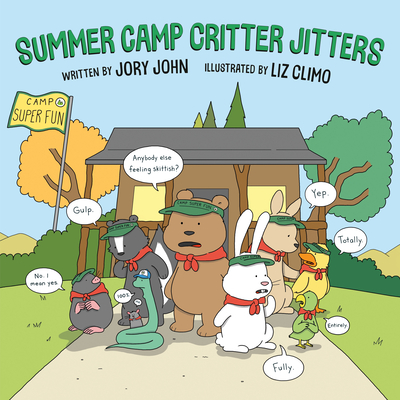 Some familiar faces and some new ones meet up at summer camp . . . and they all feel nervous! There's a duck afraid everyone will find out he can't swim, a bear afraid of noises in the woods, and a sloth who worries he'll have to catch his own lunch. But can they get over their nerves to have some fun and make new friends?
Jory John is the author of multiple books for children and adults, including the New York Times best sellers The Terrible Two and The Bad Seed, as well as the popular Penguin Problems and E. B. White Read-Aloud Honor book Goodnight Already. He lives in Oregon with his wife.

Liz Climo is an author, illustrator, and cartoonist. She grew up in the San Francisco Bay Area and moved to Los Angeles after college to work as a character artist on The Simpsons. She has written and illustrated several books, including the Rory the Dinosaur series and Please Don't Eat Me. She lives in Los Angeles with her husband and daughter.
"John shares each critter’s concern with winning candor . . . [Climo's] art offers reassurance in its soft hues, visual crispness, and clear empathy . . . the creators handle the subject matter expertly, with psychological astuteness and humor." —Publishers Weekly

"Climo’s cartoon illustrations use format conventions to marvelous effect . . . Sure to ease the worries of human campers before their own forays." —Kirkus

"Helpful for any child who dreads new experiences, this picture book delivers a reassuring message in an inviting way." —Booklist